The results of the 29th annual Veritas Awards were announced on the 12th of October.

As the longest running and biggest competition in South Africa, the Veritas Awards has earned its reputation as one of South Africa’s most authoritative and credible competitions for market ready wines and is backed by a stringent judging system.

The Veritas Awards started in 1991 and gives recognition to wines and brandies of exceptional quality and the distinctive Veritas symbol of excellence serves as an authoritative quality guideline for wine and brandy connoisseurs. Gold and Double Gold awards are of significant value to the wine industry as well, as it offers a prestigious image for the wine, winery and winemaker, brandy and brandy masters and contributes to growth in sales.

More than 120 international and local judges gather every year during September in the Cape winelands to judge the entries that cover the full spectrum of different styles and vintages. Wines and brandies are tasted blind by panels that consist of seven experts judging 10 wines/brandies at a time.

The results are announced at a glittering gala dinner in Cape Town during October, often referred to as the “Oscars” of the industry. Following the awards announcement, tastings are held in the major cities in South Africa where the public, members of the trade and restauranteurs can taste the Double Gold and Gold winners.

Congratulations to the Flagstone Winery on this wonderful result! 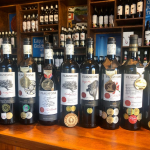